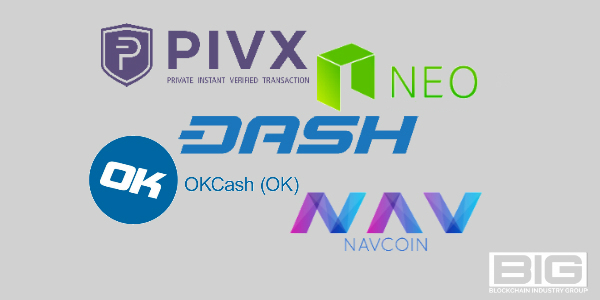 Proof of Stake (PoS) coins may be the future of cryptocurrencies as they do not require “mining” in the traditional sense in order to provide a large network hash rate on their blockchain. Instead, PoS coins reward users for holding the coins in their wallet and verifying transactions. Proof of Stake coins provide an environmentally friendly alternative to the heavy processing and wattage required by Proof-of-Work blockchains such as Bitcoin.

It has been estimated that Bitcoin mining is responsible for 41 terawatt-hours of electricity per year which is as much as the entire country of New Zealand.    The electrical demands of the mining sector will soon become unbearable on our electrical infrastructure if the necessary changes are not made soon. PoS coins are the smart alternative and many are already doing great in the market. Below are the top 5 proof of stake coins for 2018.

The San Francisco-based cryptocurrency DASH entered the market on January 18, 2014, under the name XCoin, before changing names to Darkcoin the same month. In 2015, the coin’s name was changed a third time when the coin was rebranded to its current name – DASH. DASH employs a 2-tier incentivized network that combines both miners and Masternodes. DASH is best known for their PrivateSend feature that utilizes a coin-mixing protocol based on the popular CoinJoin platform but with significant upgrades.

The hugely popular PoS cryptocurrency NEO has been called China’s Ethereum by analysts who see a bright future for this coin. NEO was originally released under the name AntShares in February 2014 via GitHub. Users are awarded GAS tokens which can be used for paying network transaction fees.  NEO is original in that it is able to support most of the common programming languages including Javascript and C++. This gives NEO advanced Smart Contract capabilities when compared to other PoS coins.

PIVX is a hard fork of DASH with some unique features such as a privacy protocol known as zk-SNARKs. PIVX combines many of the features of DASH with another popular cryptocurrency, ZCoin and by doing so PIVX raises the bar in terms of anonymity. This is accomplished by incorporating a true Zerocoin protocol. Masternodes hold a certain amount of PIVX in their wallet and they are utilized in the consensus process when determining the direction of future developments.

OKCash entered the market in 2014 under the name PIMPcash. For obvious reasons, the coin was rebranded with-in months to better align with the team’s future development goals. OKCash wallet holders earn yearly accumulations at a rate of 69% for staking their coins. OKCash originally was a PoW coin but after realizing the enormous potential of PoS blockchain systems, the development team decided it was wise to make the change in 2017.

The NAV coin platform utilizes a secondary sub-chain known as NavTech.  This layer is used for the anonymization process and mixing of the NAV coins.  NAV Coin was established in 2014 and at the time, it was one of the first PoS cryptos in the market behind the original – Peercoin. NAC coin has stood the test of time and while it hasn’t seen growth comparable to many of the other anonymous cryptos such as Monero or DASH, it is still one of the most popular PoS anonymous coins available.

Proof-of-Stake – The Future of Crypto

Like or not, the crypto community is going to have to find a happy medium with the rest of the world in terms of energy consumption. Large mining facilities are becoming the norm and a switch to PoS cryptocurrencies could help spur a new era of development in the market. In the end, its math and efficiency will always win out in the world of blockchain.

What do you guys think? Are you holding some PoS coins?