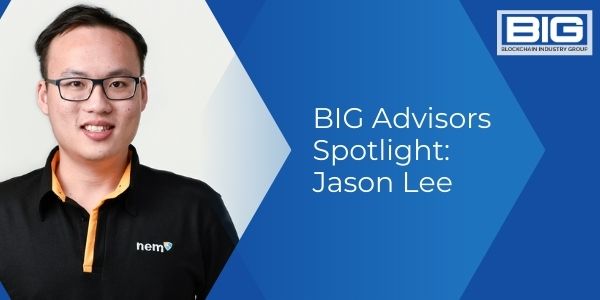 The Blockchain Industry Group (BIG) is pleased to feature one of our BIG Advisors, Jason Lee.

If you’ve spent your time browsing the Forbes 30 under 30 Asia segment, you most probably have seen Jason Lee’s name included in this amazing list.  He made it to this reputable list in 2018 – a list that “recognises young disruptors, innovators and entrepreneurs reshaping industries across the Asia-Pacific region.”

Jason’s passion for blockchain technology started in 2016 when he moved to Australia. Before that, he was with the Standard Chartered Bank via their international program. He then got interested in financial technology; he’s on the founding team of PolicyStreet (an insurance technology company). He started to work full time at the NEM Foundation in 2017 where initially, he helped with “business development and fostering partnerships.”

He’s held different positions in the NEM Foundation.  He started as Partnerships and Strategic Alliances Director to Expansion Director for Australia and New Zealand, as an Honorary Secretary, and then as a Vice President.  As of now, he holds a position in NEM as a Trustee to the NEM Continuity and Development Trust.

“I’m extremely passionate about the value that blockchain can bring to businesses, whether they are a startup or a large corporate, and regardless of the industry they play in. Through my role at the NEM.io Foundation, I look forward to further championing the growth of the blockchain ecosystem in Asia, Australia, New Zealand and the rest of the world.” – Jason Lee

Aside from all of this, he’s also one of the Board of Directors of Blockchain Australia, an organization that promotes the adoption of blockchain technology based in Australia.

Jason Lee is currently the Chief Operating Officer at the Algorand Foundation in Australia.