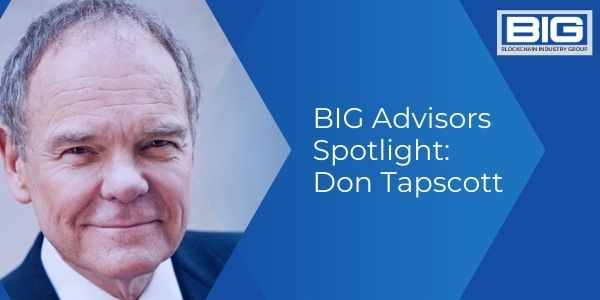 The Blockchain Industry Group (BIG) is pleased to feature one of our BIG Board of Advisors and our Honorary Chairman, Don Tapscott.

“The technology likely to have the greatest impact on the next few decades has arrived.  And it’s not social media.  It’s not big data.  It’s not robotics.  It’s not even AI.  And you’ll be surprised to learn that it’s the underlying technology of digital currencies like Bitcoin.  It’s called the Blockchain.” – Don Tapscott, TED Talks (2016)

And it certainly looks like he’s right.  Don Tapscott, Co-Founder and Executive Chairman of one of the world’s most respected blockchain think-tanks – Blockchain Research Institute (BRI), is one of the “world’s leading authorities on the impact of technology on business and society.”

Don has been a thought leader in the worlds of technology, society, and economy for over 3 decades.  “He has authored 16 books, including Wikinomics: How Mass Collaboration Changes Everything, which has been translated into over 25 languages.”  His latest book, Blockchain Revolution (co-authored with his son, Alex Tapscott), talks about blockchain technology and how it can truly “change what we can achieve online.”  The book also explains the basics of blockchain and how it can most certainly “power” our future.

Almost a year after the published book, Don and his son who is also a startup CEO, Alex, started the Blockchain Research Institute with an aim to conduct the “definitive study on blockchain and its impact on business, government, and society.”

Recently, Don published an article to introduce his latest work together with his team at BRI and in collaboration with the Chamber of Digital Commerce.  A “120-page report reimagining US technology strategy and policy.  This landmark report is a proposal for the Biden-Harris administration and “argues that it’s time for a turn” – time to embrace this new era of technology. If you’d like to know more about the report, you may download it from here.

BRI also launched a webinar series inspired by the recent report mentioned above. If interested, you can watch the first webinar here.