York University and The BlockchainHub of the Future

Peter Lee: Tell us a little about yourself and your organization?

Furthermore, I am a “Durland Innovation Award” recipient for a Blockchain use case; the use case was described as “A cutting edge security technology to protect artists from forgeries and theft.”

Finally I am a holder of the “Beta Gamma Sigma International Award” limited to the top 10% of undergraduates and the top 20% of graduate business students.

Peter: Who benefits from your organization and how?

Mohamed: The BlockchainHub, first of its kind in Canada, provides top-notch services on Blockchain education, research and technology commercialization, to catalyze the potential of this technology to transform society and disrupt existing value chains.

Located at the Bergeron Centre for Engineering Excellence at York University (Toronto – Canada), the BlockchainHub works with 9 different partner organizations and has a community of 1500 Blockchain experts with access to 15000 entrepreneurs across the Greater Toronto Area.

To learn more about our services, The BlockchainHub website is a good place to start www.theblockchainhub.com

Peter: Is The BlockchainHub a public, private or mix of public/private organization?

Mohamed: We are part of the BEST Lab at York University.

Peter: Is it subsidized by the Province of Ontario or Canadian government?

Peter: Does York University share monetarily in the commercial success of your incubator startups?

Mohamed: We don’t take any equity on the start-ups.

Peter: What’s the one biggest thing people don’t know about your organization that you wish they did?

Mohamed: Is that The BlockchainHub is becoming a well renowned international innovation hub; we just expanded our certification programs to include IoT, AI, hyperledger and technology management.

We help the community to appreciate the power of the intersection of Blockchain with other technologies, which I like to call “The autonomous revolution”.

Peter: I don’t know of that many organizations like yours, that has such an extensive collaboration and ecosystem of public/private and educational/non-profit/commercial institutions. How unique is your organization?

Mohamed: We are so unique because of our partners, the diversity of our service offerings and our community engagement.

Peter: Why aren’t there more collaborations like this occurring throughout Canada and internationally (or, are they occurring)?

Mohamed: I think everyone is trying to understand how the space is evolving and the focus is on commercial use of this technology so no one has really thought of taking the lead on the education/community side.

Peter: What has surprised you most about your journey with this organization?

Mohamed: During my journey with The BlockhainHub, I am always amazed by the vibe and the energy in the community, whether it’s in the class or in the events we organise it’s a feeling that you cannot get elsewhere and we are proud of building a strong community around cutting edge technologies.

Peter: Tell me about the future? What does your organization look like 5 or 10 years from now?

Mohamed: Our vision in the next years is to continue training the leaders of the future to help make the best use of technology, contribute in creating values in their respective companies and therefore in the whole society.

In addition of helping build the next real life applications using cutting edge technologies such as Blockchain, IoT and AI.

Finally continue building the community and expand our services internationally.

Peter: China periodically comes up with multi-year plans to dominate certain key industries and technologies such as for AI and driverless cars.  Is The BlockChainHub part of a multi-year Canadian plan to dominate the blockchain space; or, was your organization conceived and built in a more organic, ground up approach?

Peter: This is not directly related to your organization but we should all be thinking of this. How can we save the earth, this world and humanity?  Name one person, company or organization you feel is really having an impact in this area and why?

Mohamed: I think it’s something that fit perfectly within The BlockchainHub mission, educating people on new technologies is one of the paths to improve the way we work, save resources and therefore save the earth, this world and the humanity.

One person that I can think of is Elon Musk, a visionary entrepreneur with the objective of encouraging the use of renewable energy and advancing the world and the humanity.

Peter: In 100 years, which of Elon Musk’s companies do you think will have had the most impact on mankind?  Tesla, SolarCity or SpaceX?  (Or, perhaps The Boring Company?)

Mohamed: Electric cars and renewal energy are very common at this point so I would say the company with most impact in 100 years will be SpaceX (And probably The BlockchainHub in mars).

Peter: What can you tell us about yourself that our audience probably doesn’t know? 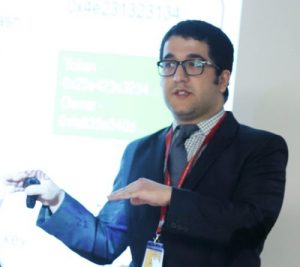