Draper University is a school for innovators. They are helping people do the great things they are capable of. Expect to be inspired. To do things you didn’t think were possible. To be fearless. To build a network of friends, mentors and colleagues that you will take with you on your path. Tim Draper, Founder of Draper University.

Peter Lee: Tim, thank you for taking the time to do this quick interview with us. How would you describe your storied career as a venture capitalist, and Draper University?

Tim Draper: I have been a VC for the last 30+ years. During that time I have been fortunate enough to have backed some of the most extraordinary and transformative companies in the world, including Tesla, Baidu, Hotmail, SpaceX, Skype, Robinhood, Coinbase, TwitchTV and many more.

I learned a lot about what it takes to be an entrepreneur, a willingness to try and try again, a determination, a singular focus and a willingness to hold on to your vision against a population or a media that is somewhere between non-believing and hostile toward your idea. These people, successful or not are heroes. They take long odds at extraordinary outcomes.

Peter: What was your motivation for starting Draper University? Was there any single event that triggered your interest in starting a University or did you always know that you wanted to get into the business of educating entrepreneurs?

Tim: I looked back at the bucket list that I wrote when I was about 30, and it said “Start a school.” But, I had totally forgotten that I intended to start a school by the time Draper University came to be. My motivation was two-fold, first to create more heroes who would drive to build the great companies of the world by focusing on the great challenges of the world, and two to potentially fund some of those entrepreneurs who have big visions and plans through my venture capital fund, Draper Associates.

Peter: What do you hope to achieve with Draper University? What does unmitigated success look like?

Tim: Already, Draper University has exceeded my expectations. The school has trained about 1000 heroes who have started over 350 companies. They have come from more than 75 different countries and several of them have become extremely successful. Surbhi Sarna started her company at Draper University and she recently sold it for $275 million. Patrick Dai started the QTUM token, and it grew to be worth $7 billion. And the school is only 6 years old!

Long term, I hope that we have an impact in transforming education. We have pioneered the team-based, activity-driven teaching approach. We have pioneered the “fail and fail again until you succeed” approach, and we are the only entrepreneurial boot camp with an actual boot camp, where Navy Seals and Special Forces and Army Rangers train students in what we call survival training.

Peter: What is the biggest disruptive use of blockchain that you think we’ll actually see within the next few years?

Tim: I suspect that the next few years will disrupt banking first, but it will have an enormous effect on all commerce, insurance, health care, government and many professions will change because all the bitcoin associated technologies will begin to outperform the people in those professions with the mundane tasks.

Tim: Governments have to face the fact that they will have two forms, the physical and the virtual. Most government can be done virtually, so it doesn’t need to be tied to a given land mass. What that means is that all the governments of the world and some that haven’t been invented yet will be able to compete for you in the virtual world. We could potentially see people getting their social security from Chile, their health care insurance from Canada, and their driver’s license from AAA, and their welfare from some country that hasn’t been invented yet.

Peter: You’ve been the primary backer of a petition to split California into smaller states. Are there any other big initiatives like that you see on the horizon for yourself? (What else remains to be accomplished or have you already reached most or all of your goals?)

Tim: There is always more to do. And I failed to get California’s corrupt (bunion owned) government to dissolve in favor of three fresh innovative and accountable governments. Somehow, whether you liked the idea or not, you do not get to vote on my proposal. In an unprecedented move, the California Supreme Court took my VALID proposition off the ballot, because they felt it would be “disruptive.” Damn right it would, and for good reason. Anyway, they proved my point that the bureaucratic unions (the bunions) totally control the state and won’t let you vote on anything they feel threatens their hegemony.

Peter: What can you tell us about yourself that our audience probably doesn’t already know?

Tim: I am a painter, an author (How to be The Startup Hero (on Amazon)), and a songwriter—“the Bitcoin Hustle,” and “The Riskmaster.” 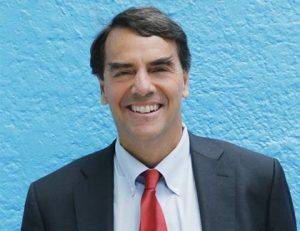