Here’s a detailed research report of what’s on Solana for Q2. Originally published on Messari.io. 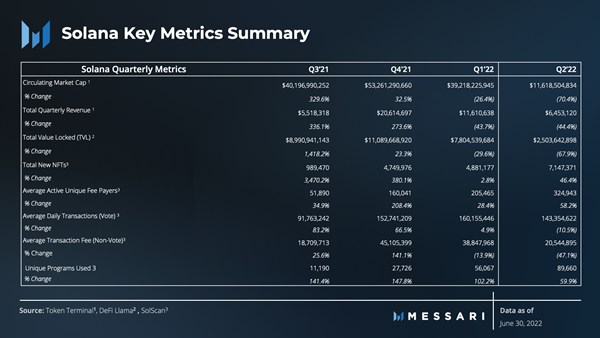 A Primer on Solana

Solana is a public, open-source blockchain that aims to deliver scalability and support smart contracts without sacrificing decentralization and security. It accomplishes this through a novel timestamp mechanism called Proof-of-History (PoH). Using PoH, the network can order and batch transactions before they’re processed through a separate Proof-of-Stake (PoS) consensus. Additional design goals include sub-second settlement times, low transaction costs, and support for all LLVM-compatible smart contract languages, including Rust, C, and C++.

As a follow-up to the State of Solana Q1 2022 report, this report will revisit developments and events from the prior quarter, analyze the network’s most recent quarterly performance, and give insight into the coming months. A complete appendix of data tables is available at the end of the report.

Following unprecedented growth in 2021, the Solana network experienced continued growth in some areas but challenges in others during Q1 2022. Volatility was prevalent across metrics, but stabilization of network usage, financial performance, and network infrastructure occurred by the end of the first quarter. A growing NFT marketplace reached billion-dollar sales volumes, TVL diversified across an increasing number of DeFi applications, and strategies to launch applications across several new sectors were underway as the quarter came to a close. At the same time, growing pains persisted with periods of unstable network conditions, and as a result, the outlook for Q2 2022 was unclear.

Ultimately, chaos arrived at the onset of Q2 as Layer-1 network activity declined dramatically across the space. Macro forces such as hawkish monetary policy and the $60 billion collapse of terraUSD (UST) and LUNA set the market into a tailspin. Solana, like most networks, felt the macroeconomic environment as we saw declines in financial and network usage metrics.

However, the bear market has not stopped Solana from implementing solutions to improve network stability and expand its ecosystem. In Q2, core developers focused on building out QUIC and a novel fee prioritization mechanism to improve the network’s reliability and reduce downtime during periods of congestion. Further, strategies to expand ecosystem adoption became more evident with the continued expansion of NFT marketplaces, progress towards EVM compatibility, advancement of Solana Pay, and the roll-out of Solana Mobile. 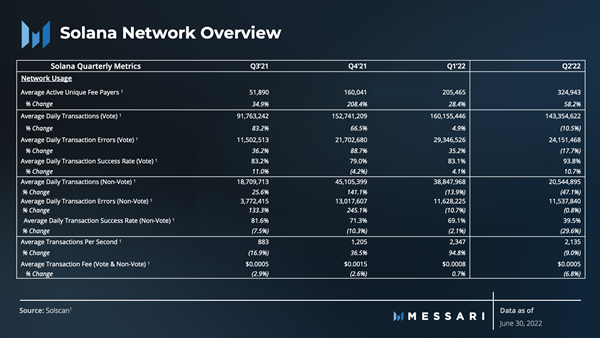 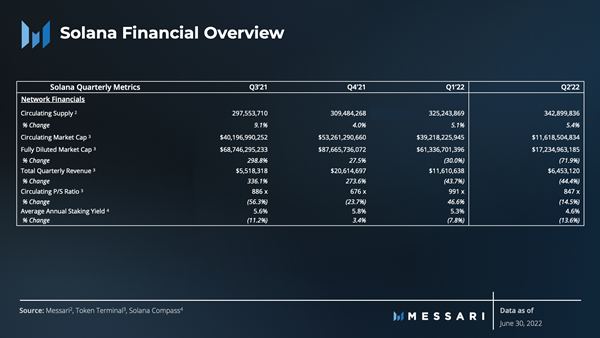 Solana experienced declines in network usage (except for unique fee payers) and financial performance for the first time in over a year. The average number of daily transactions decreased by 17.6%, while revenue decreased by 44.4% due to degraded network performance. Average transaction fees (-40.6%) declined in line with revenue (measured by user expenditure on transactions). Notably, Solana’s average Q2 transaction fees were the lowest amongst a peer group (defined later in this report). Consequently, the trend of price-to-sales (P/S) reversed course, and the ratio of price to revenue improved to 847x, down from 990x at the prior quarter end. 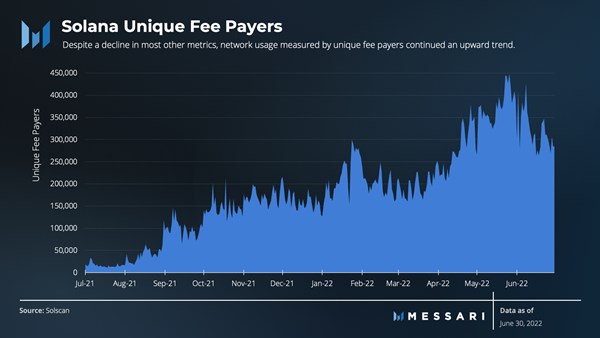 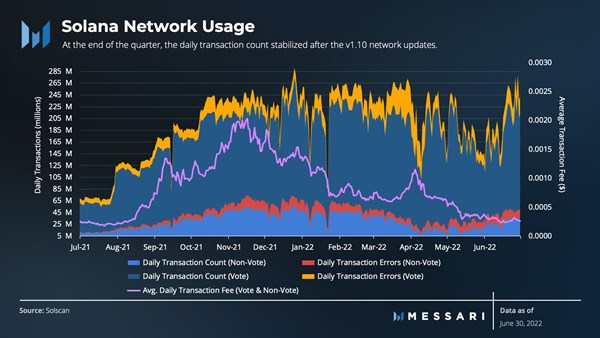 Transactions on Solana can be divided into two categories: 1) consensus and 2) token transfers and smart contract logic. Solana’s PoS consensus process is unlike other smart contract platforms because its consensus votes are registered as on-chain events. Non-vote transactions are analogous to EVM transaction counts and represent the actual economic activity on the network. The sum of both is considered total transactions.

However, two aspects of network performance are notable:

The v1.10 series adds various stability and performance improvements to address the network congestion experienced on mainnet over the last several months. The series introduces QUIC and Quality of Service (Qos) packets by stake weight and fee prioritization. The v1.10 series continues to roll out slowly, and the subsequent release series, v1.11, will focus on making QUIC default and optimizing the other features included in the v1.10 series.

Though not perfectly quantifiable, it appears that the network showed signs of stabilization post v1.10 as lower transaction fees occurred and the daily transaction count reversed trend between the middle of May and the end of June. Further, the trend in TPS also revered course. For perspective, average daily TPS fell to as low as ~700 during times of degraded network performance. After v1.10 began to roll out, TPS reached all-time highs above 3,000 and averaged closer to 2,300 per day. 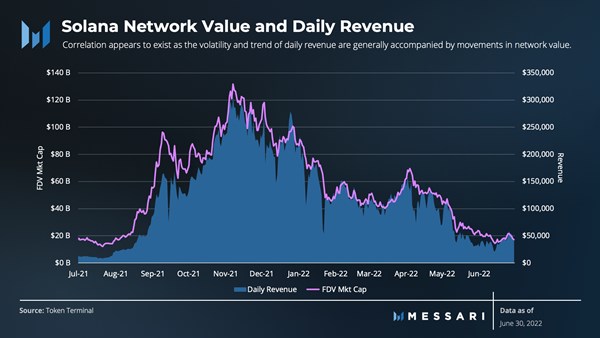 If the relationship continues to hold, an area of concern is network reliability. As seen in 2021 and throughout Q1 and Q2, degraded network performance decreases network usage and reduces the network’s continued flow of revenue. If Solana were to continue to experience degraded performance that lasts for a material amount of time, a resulting drag on fundamental usage may catalyze volatility and drag on network value. However, if implementations of v1.10 and subsequent versions continue to drive stability along with successful ecosystem growth strategies, fundamentals will likely move in a positive direction, and network value may too.