Polygon Partners with ABYA to Increase Blockchain, Cryptocurrency and Web3 Literacy and Adoption in Africa

Polygon, a decentralized Ethereum scaling platform has partnered with Africa Blockchain Youth Ambassadors (ABYA) to implement an initiative that seeks to increase blockchain, cryptocurrency and web3 literacy including their adoption as the new approach to advancing technological interventions in Africa. The joint initiative with a pilot starting in Kenya, targets to recruit, train and place university students as the frontline experts and goodwill ambassadors for blockchain cryptocurrency and web3 in the continent, effectively making them “change leaders.” 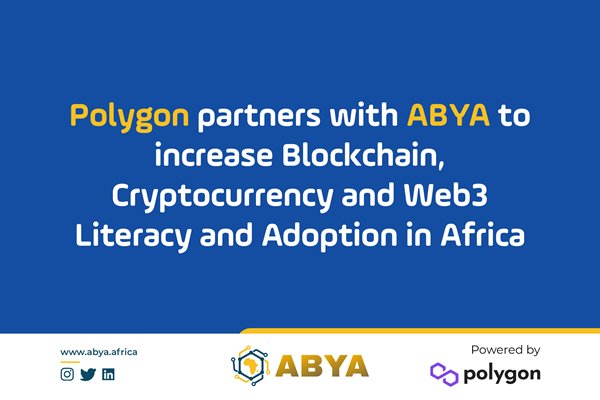 Polygon has committed a significant grant for the start up making this partnership very important as it offers both parties an opportunity to test and learn. A successful implementation of the pilot in Kenya will no doubt give ABYA the impetus to expand its operations across the region then the continent, applying itself to a template as a replica whilst advancing future methodologies from findings in the field. Over the last couple of months, Polygon has restructured its policy in approving and disbursing its grants – more critical, Polygon has offered to provide mentorship & marketing support to help build capacity and raise visibility besides driving the initiative to build and scale. The partnership is envisaged to be that of long-term essentially to ensure it succeeds for full benefits as envisaged to accrue to the student community, investors, the segments so targeted and the economy at large.

ABYA is among the first beneficiaries and will make the support from Polygon count.

Blockchain and cryptocurrency offers a pivotal opportunity to the youth. By venturing into this space, leveraging on the emerging technology, they will not only be able to express themselves in a creative way but they stand a chance to showcase and sell their capabilities as experts and more important be blockchain cryptocurrency and web3 entrepreneurs, and especially those that are tech savvy. The youth have the rare opportunity also to be investors even as they drive and shape this conversation and championing advocacy. The young people will have the chance of becoming financially independent in the long-term through such initiatives. This is due to the low barrier of entry in the space compared to other technologies. With increased blockchain, cryptocurrency and web3 literacy and adoption, the African youth will be provided a platform for development and gainful engagement in line with driving the youth agenda for self-leadership and empowerment, bringing suppliers and developers together within a structured ecosystem.

This initiative is touted to have the greatest ripple effect within the continent in the long term because of its game-changing model. Unlike previous tech initiatives that targeted only developer communities, ABYA addresses all parts to the equation; that is, developers, users and other stakeholders, a big boost for Polygon in the long term including other interested protocols. Immutability, transparency, efficiency, traceability, and security being the hallmark of blockchain places the technology at the top of the most sought after change initiative. Its versatility brings with it increased demand for expertise not to mention the numerous sectors that can benefit from this initiative to change lives.

Blockchain technology has received much hypes hence receiving a lot of interest from diverse industries. Interest from business leaders is gaining momentum. The public however, is not fully informed, of its existence and potential, especially in Africa. It is such joint initiatives such as the one being advanced by both Polygon and ABYA that will drive marketing through dissemination of requisite information inclusive general architecture, design, strengths and utility. A one stop resource center awaits…. thanks to Polygon. Meanwhile educational resources will be made available, webinars and educational events will be fast tracked.

Polygon’s partnership with ABYA will be a game changer. The joint initiative will not only serve as a demonstration ground for other similar ventures in the continent but be the much sought after and the preferred instrument of change. The shared vision will place the two organization under intense scrutiny as they jointly seek to catalyze and accelerate this phenomenal change. This will only be made possible through conceptualizing, developing and implementing blockchain, cryptocurrency and web3 as the “go to” operations model. In the young people, Polygon and ABYA have the best chance yet to mobilize and help shift mindsets in the advancement of the new technology for a better world!