Peter Lee: Gerard, tell us about yourself and the beginnings of the Government Blockchain Association?

Gerard Daché: Around 2015, I found out that my son did very well with bitcoins. I had been running a business that had been flat for several years and I was looking to expand my business. So, I looked in blockchain.

However, at the time, it seemed that all of the activity was in Fintech and I had no experience, relationships, or capability in that domain.  I lived near Washington, DC and my experience was in government contracting.  I looked around and saw virtually no activity in that space and figured that I could compete there.

So, in August of 2016, I started a meetup.  I rented a luxurious space, paid a lot for it, and after an extensive promotional campaign, we had two people show up.  One left early.  It was demoralizing, and I knew that I could not afford that.  So, we got space in a local library for free and by the fall, we had 6-8 people show up.  By the winter, we moved to a restaurant / bar and had 2-40 people attend.  We became an association in March and in May we launched a static website.

A few months later, we added some functionality so that people could join, and it would be a bit more like a social networking platform.  By October of 2017, 14 months after our first meetup, we had 3,000 people attending events in 35 cities around the world.

Peter: Are you full time as head of the Government Blockchain Association?

Gerard: Is there such a thing as “Double Full-Time”? If there is, that would be me right now.

Peter: Since you have or have had your hand in so many different endeavors, do you now consider yourself an entrepreneur, a non-profit head or a ‘governmental’ person; or, all 3?

Gerard: I have always been a risk-taker.  When I was a teenager and college student, my risks would often include anything that moved fast, was high off the ground, could kiss, or could be fatal.

As an adult, employer, husband, and father, I had to change my adrenaline sources.  Today, I am thrilled by helping others succeed.  I will always be an entrepreneur at heart.  However, I am less motivated by profit than I am by value.  In business, the goal is to maximize profit.  However, my perspective is that if you maximize value, profit will come.  It will chase you down.  Then, I get the joy of doing something with it that adds more value to people’s lives.

So, to answer your question, I am clearly not a government person.  And, I don’t know if I fit into any of the other two categories.  I would just say that I’m someone who is trying to take care of my friends and family and leave this world a little better than I found it.

Peter: Who benefits from the Government Blockchain Association and how?

Gerard: I realized early on that there were a lot of people who wanted to get in this space. However, there was nowhere for them to go.  So, we started chapters so that they could meet each other and network to develop opportunities.  We soon realized that those chapters needed high quality content.  So, we began to establish working groups.  Today, we have about 40 working groups organized around government use cases.

We also discovered that there was a serious need for training so that people could develop and improve their capabilities.  So, anyone looking to work with blockchain could benefit from our organization.

Peter: I see a lot of personal initiative from you and the governmental employees and contractors that are involved.  However, I don’t hear much about what the government is doing.  What is the role of our government here?  What are they doing and what should they be doing?

Gerard: The government is not the force behind this innovation.  In fact, Blockchain technology runs counter to many of the paradigms that flow through government.  In this case, it has clearly been the private sector that has taken the lead in developing and implementing this technology.

However, don’t count governments out just yet.  First, it is important to understand that we do not live under a single government.  We have local, state/provincial, national and international government organizations.

While most of them are waking up like sleeping giants, some have taken an early lead.  We are seeing governments all over the world become engaged in trying to understand and adapt to this technology.  They move slower than the private sector. However, the rate of change in the private sector is dragging governments into the future and they are being forced to change and adapt to these new technologies and realities.

Peter: What’s the one biggest thing people don’t know about the Government Blockchain Association that you wish they did?

Gerard: We are a non-profit.  We are not selling anything or competing with anyone.  We are a resource for anyone in government.  However, we do have operating costs and we charge for them. We keep our costs low and affordable.  Our goal is to provide more value than people pay for.  If that remains true then we will have lots of members, and we will have a healthy organization.

Peter: What has surprised you most about your journey with the Government Blockchain Association?

Gerard: I was overwhelmed by the pent-up enthusiasm for this technology and the willingness of people to work together to form a mutually-supportive and positive environment.  People from all over the world came forward and said “Hey, I would like to lead a chapter or working group.”  They have volunteered their time and expertise for the good of the community.  I feel like I did not do very much.  However, the collective efforts of members all over the world has greater something much bigger than anything I could have ever done on my own.

Peter: Tell me about the future?  What does the Government Blockchain Association look like 5 or 10 years from now?

Gerard: I have no idea.  However, there is one thing that I do know.  Right now, Blockchain is hot.  It is a new technology.  However, it will not be a new technology for ever.  It will mature and unless our organization does not look forward to seeing the next “new technology” coming down the road, we will become irrelevant.  Right now, we have our work cut out for us.  We are drinking from a fire hose.  But, sometime in the future we will need to find the next fire and start drinking from that hose.

Peter: This may not directly relate to the Governement Blockchain Asscociation but how can we save the earth, this world and humanity?  Name one person, company or organization you feel is really having an impact in this area and why?

Gerard: The one person that I can think about is Jesus Christ.  However, I’m not sure if he is available for an interview.  For the time being, I hope that I can represent his views and plans and be an example of someone who cares about people, this earth and the future that we all share.

Peter: What can you tell us about yourself that our audience probably doesn’t know?

Gerard: My wife and I have seen a lot of struggle in our journey together.  However, through it all, we have grown and matured.  Many of the struggles we faced have prepared us for the mantle of leadership that we have today.  I see myself has having been fortunate enough to have learned a lot from great people and principles.  Today, I am a very grateful and humbled man with a passion to help others succeed. 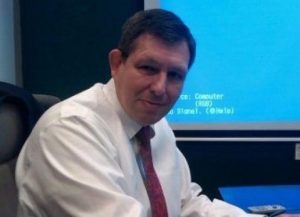