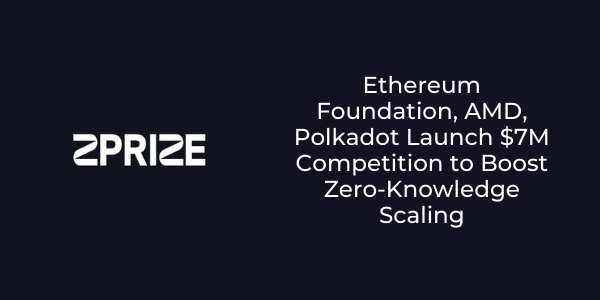 Announced on April 19, ZPrize is an industry-sponsored contest supported by 21 Web3 organizations including Polygon, Polkadot, Mina, and the Ethereum Foundation. AMD-Xilinx will also provide competing teams with high-powered computing equipment.

ZPrize said in a statement that teams will try to engineer “new algorithms and techniques that achieve performance metrics unmatched by the best zero-knowledge systems.” The winners must open-source their submissions so that other developers can integrate any breakthroughs into their work.

Zero-knowledge proofs allow for blockchain transactions to be executed without publishing any data aside from the time and date they occurred. Only the transaction’s counterparties can access detailed information, including the wallet addresses involved and the assets transferred.

The technology has been explored by academics since the 1980s but found new life in crypto when Zcash launched in 2016. Indeed, protocols that use ZK proofs have been on a tear. In the past six weeks, Zcash is up 45%, Immutable X bounced 61%, and Loopring gained 38%.

Ethereum co-founder Vitalik Buterin described ZK rollups – a method for compressing Ethereum transactions to save blockchain space – as the future of Ethereum scaling, and scaling network Polygon earmarked $1B to build zero-knowledge products.

ZPrize is inspired by XPrize, a privately-backed non-profit that hosts public competitions to encourage breakthroughs in technologies such as carbon removal, space flight, and pandemic response initiatives.

“The goal of the ZPrize is to spur a quantum leap in zero-knowledge cryptography that so many Web3 protocol and application developers are waiting for to enable their products to scale to millions,” said Alex Pruden, COO of Aleo & founder of the ZPrize initiative.

Appearing on The Defiant podcast, Gunter said that recent innovations in zero-knowledge cryptography have positioned the technology as “ ripe to underpin a lot of different breakthroughs.”