Blockchain in the Era of Pandemic

Global Blockchain based system can play a huge role in an active pandemic as well as in a passive (after normalization) epidemic. It could acts as a single source of truth of information sharing, tracking, tracing of data, such as test cases, symptoms, possible treatments, case numbers, case complexity, demographics, age-graphics etc. It can act as a solution and system for donation, grants, insurance claims and government payments. Further can allow faster insurance claim processing, supply chain tracking, alerting AI based systems for solutions, simulations etc. A Blockchain based solution will keep the world ready for the next war.

This blog starts with a story that illustrates the pain points of centralized system, without going into the technical details. It lay the foundation for ‘why a decentralized Blockchain based system’ is required to handle and further check pandemics.

Let us journey to a technology-less time.  There was a beautiful village with few families, where, instead of currency, they exchanged goods.

The vegetable farmer trusted the rice farmer; however, over time, there were several promises transacted between various farmers and it was difficult to track those promises, which resulted in a breach of trust. Finally, the villagers appointed a person to keep track of these promises. This person was given the title LedgerMan (centralized third party). Soon, the LedgerMan established trust; however, he was overwhelmed with promises and started demanding a fee (transaction cost). The villagers agreed to pay him a portion of the promise as a fee. This eventually turned the LedgerMan into a rich person. Later, the LedgerMan indulged in corruption, started accepting bribes to tamper with the ledger, bribed villagers to keep his position safe, and sometimes enhanced the fee.

Soon, the villagers realized the challenges of having a LedgerMan (a centralized system). Hence, they decided that, instead of a single LedgerMan keeping the promises, promises would now be kept by everyone (decentralized). There would not be a single person holding the promises; the villagers would meet at a designated place to make promises, and every promise would be recorded by each villager (P2P network).

Story is simple, where vegetables, rice can be substitute with healthcare system, healthcare alters etc. Such system can only be successfully when they are decentralized. Having said that, let us discuss how a decentralized system based on Blockchain can turn into a savior during, before and after a global pandemics.

Coronavirus Covid19 death toll is thousands worldwide and there are 200K cases so far, which defines Covid19 as the most deadly in the recent history.

Various countries have surveillance system to better understand the extent of health risk behaviors, to monitor the progress of prevention efforts, to collaborate with public health professionals and government to support timely and informed decision-making. Such as CDC in USA, Infectious Diseases Surveillance in Japan etc.

Public health surveillance should be a continuous – collection, analysis, interpretation, planning and evaluation of public health. However, its effectiveness lies in BIG 5 V’s:

I attribute ‘Value’ as the most important ‘V’.  Timelier an information is available, more effective it will be, in tracking, tracing and mapping a health issue. Even before an issue turns into an epidemic or a pandemic, it can be stopped if the information shared across the surveillance system is timely and trustworthy.

H1N1 was first detected in a 10-year old girl in California in April 2009 and it was declared a pandemic in June 2009 by WHO, similarly Covid19 is traced back to November 2019 and later turned into a global pandemic.

Consider a surveillance system, which quickly alerts the world of a new trace of a virus or disease and turns that surveillance into an active surveillance, allowing the world to be informed timely and prepare timely. If the surveillance systems are centralized, information sharing will take time & can be altered (politicized). Time & truth are the most important factor in defeating pandemics.

Centralized data is a bottleneck; it can be manipulated by governments or agencies and hence lack the ‘trust’ factor. Blockchain is a decentralized distributed system which is trustless as the trust lies in the Blockchain itself. This ensures timely and trustworthy information sharing without being corrupted or mutated by any agencies.

Urgency can be infused only with volume, variety and veracity of data. If globally, all the public health system starts reporting data timely, it leads to volume, variety and veracity of data over a single system (Blockchain) which injects urgency to government. Besides injecting urgency, it helps public health agencies to access the same source of truth (data) and analyze it.

Blockchain Network in the era of Pandemic

Consortium Blockchain (permissioned Blockchain) is owned by a founder organization, but managed by a consortia (set of participants from different organizations). Consensus can be trusted as various organizations participate in it and they have a collective interest in the outcomes. A consortium offers many benefits such as the following:

Why Blockchain as Savior?

Following are the primary reasons why Blockchain can act as a savior in a pandemic, could also help in detecting and reacting, as soon as a first occurrence is reported, and hence alter the world about a future pandemic.

A GSC (Global Surveillance Chain) is a huge system of records that is immutable. As the world starts adopting more and more Blockchain use cases, think about the immense data contained in a Blockchain. Permissioned Blockchain will have consortiums data that will continue to grow massively.

Analytics and predictive analytics on Blockchain will uncover many stories, facts, and insights. Such an ecosystem will offer real-time, trusted, and unaltered information, which will empower not only enterprises but also smaller organizations and individuals to analyze information, and in permissioned Blockchain, relevant (authorized) information.

GSC (Global Surveillance Chain) – both in an active or a passive form will have magnitude of data. Where there is data, there is analytics. Patients trying to monetize their medical records also serves humanity a lot. This will leads to interested patients who can volunteer for ‘under test’ drugs and vaccines.

Further, various other systems can be integrated with GSC (Global Surveillance Chain).  Following diagram illustrates the power of integrated system with the Blockchain. 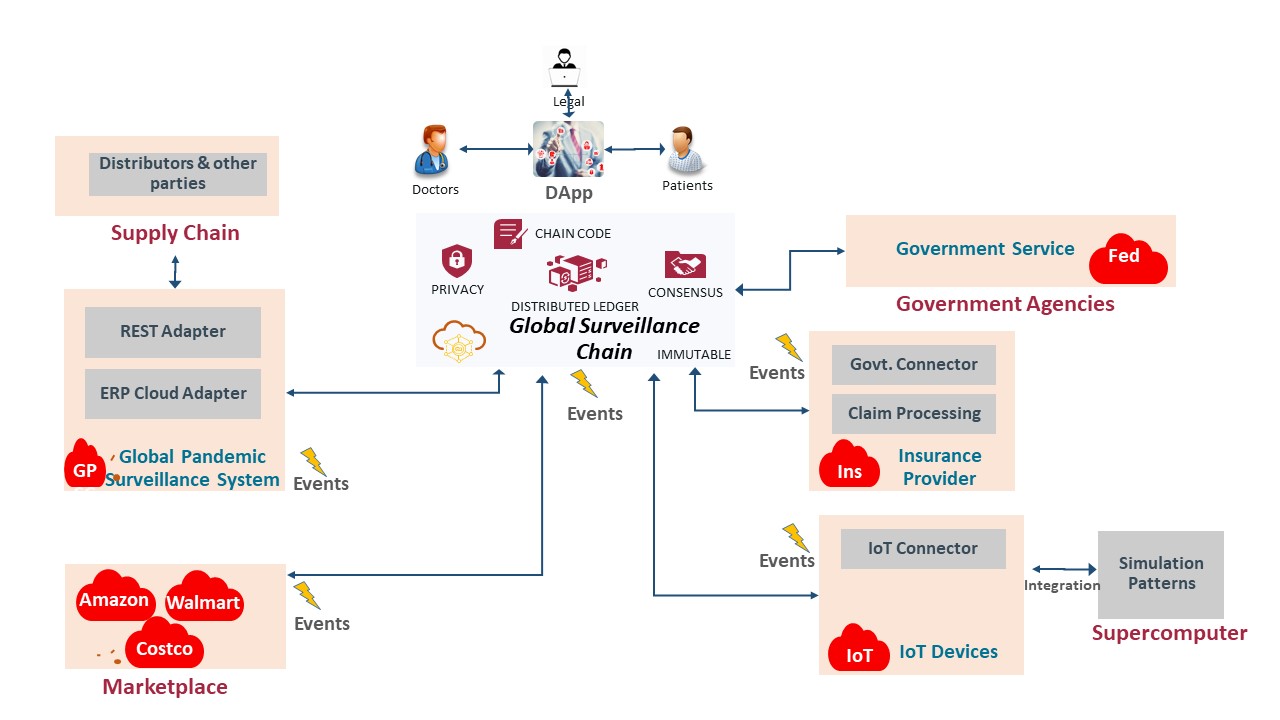 Supply chain can be connect with GSC, similarly marketplace (online and bricks-&-mortar) can be alerted etc.

GSC (Global Surveillance Chain) is global and cannot be affected by politics, which establish it as single source of ‘TRUTH’.  Hence, such permissioned decentralized system can easily alert health care professionals too. DApps built on GSC can allow health care professionals, agencies, doctors to receive information. They can track and trace their patients and their real time data (example temperature when patients are in home isolation etc.) via IoT based system. Lab tests approved for patients, lab test results, prescriptions, telemedice etc. can be effectively implemented on the GSB Blockchain. As it’s global and based on Blockchain technology, its highly available and scalable. Thus allowing countries with poor infrastructure to avail benefits of global initiatives and further help in containing the spread of the pandemic.

Conclusively, a Cross Border, Global Blockchain based system can play a huge role in an active pandemic as well as in a passive (after normalization). Beyond borders, a trustless system can inject treatment and can prevent too.