Blockchain and AI: Will the Marriage Work?

Blockchain and Artificial Intelligence are changing the world around us. Both the technologies, with a plethora of opportunities and endless potential, are individually catalyzing the innovation and redesigning the way the business world works. There’s no denying to it. But, will their combo work? Will the marriage between two be successful?

Taking the same approach forward, I talked to our proficient Blockchain developers and have articulated this article revolving around how Blockchain technology can transform the AI and vice versa. But before we begin, let me spice up this discussion by sharing that the two technologies have contradictory features (as shown in the table below.) 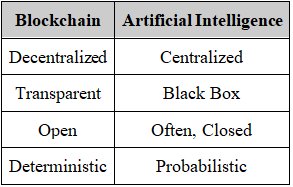 Does that sound interesting? Let’s jump directly into how the two technologies will change the future of one another.

The Artificial Intelligence, with its approach to help the machines mimic the human behavior, are transforming various business sectors, especially the customer experience sector. But, there are various challenges and limitations in integrating the AI in mobile apps and other tools employed in the market. Here’s how Blockchain technology will tame the AI technology and enhance its application:

One of the major issues with AI chatbots and machines is that they lack explanatory skills. They do not offer a clear audit trail with which they can justify themselves and gain the trust of others. However, with the Blockchain’s involvement in this whole, this problem will be solved. Blockchain will provide AI machines with a decentralized database where each and every activity will be recorded securely and in real-time, ensuring that the machine could present a complete route to track back the process it followed.

Traditionally, all the AI machines gather and store their data and insights individually, which limits their knowledge. But, by decentralization of data, the Blockchain will help them learn from each other’s data. This will help them learn better models, make better actions, and bring better outcomes. Thus, the effectiveness of AI machines will be uplifted.

An AI coded in a DAO with specific smart contracts will gain the potential to perform limited actions, which will prevent its failure in case of catastrophic situations.

Blockchain technology, in AI marketplace, will ease the process to store and share data securely. It will provide a fluid integration that will lessen the barrier to market entry and dwindle the competitive advantage of the tech giants. In other words, it will render a wider data access and a cost-effective data monetization mechanism.

Impact of Artificial Intelligence on Blockchain

Blockchain, undoubtedly, has gained momentum in the market in the past few months. The technology has entered the Healthcare, Retail, Travel, Supply chain, Enterprise, and many other industries with its significant features, with Blockchain app development the secret tool of all. However, the technology is not perfect. It also has various limitations, some of which will be treated by the AI in the following ways:-

The Blockchain technology is growing at a substantial pace of 1 MB every 10 minutes. This has brought the need to manage data properly and delete the unnecessary data sooner. This is where AI can help. By introducing a new decentralized learning algorithm called Federated Learning, the technology can make it possible for the Blockchain-based systems to easily detect and eliminate the irrelevant data and deliver more efficient results.

Though Blockchain technology claims to be secure, there’s a probability of hacking it as well (not now, but might be in the future). To ensure that this phase never comes, AI can be considered as the right companion. The Artificial Intelligence technology, using its predictive learning phase, can help the system learn from its surroundings and send an alert when there’s a risk of upcoming intrusion. And this way, help Blockchain to build a secure applications deployment.

In the future when all the data will be available on Blockchain, it will be necessary for the business leaders to look into the matter of granting access, tracking data usage, and other such mechanisms. This is where AI will play a pivotal role by introducing its intelligent machines and mobile apps.

As estimated by the top Blockchain app development companies, the total running cost of verifying and sharing transactions on the Blockchain is somewhere around $600 million/yr. By introducing an intelligent AI-based system in Blockchain processing, it might be possible to evaluate the likelihood for particular nodes to be the first performing a specific task, raising the possibility to other miners to shut down their endeavor for a particular transaction and lower down the overall costs. Along with, the Artificial Intelligence will reduce the network latency which will result in lower energy consumption and better efficiency.

Although Blockchain and AI technologies are like the extreme sides of a coin, both the technologies are proving to have the potential to enhance each other. However, one needs to think out-of-the-box and keep on experimenting with their potential to see what new possibilities can emerge out.

Do you agree? Or you still believe that the marriage between AI and Blockchain won’t work?